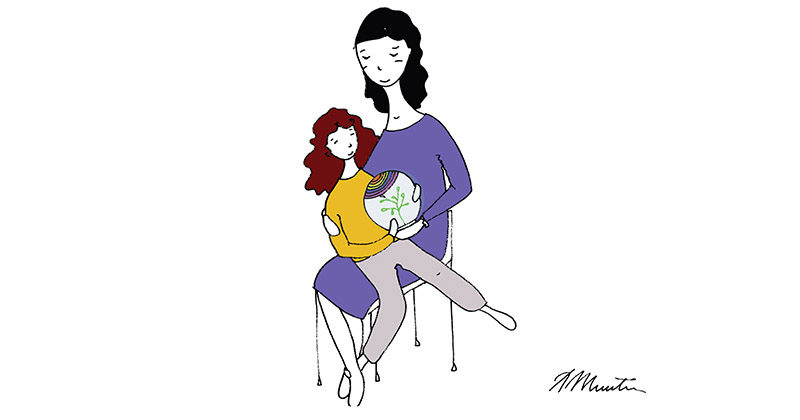 The last time I was in any sort of parenting comfort zone was before my first child was born. Back then, I had very clear ideas about how to do it all, and loads of confidence. But pretty much from the moment the child emerged – flouting every stipulation in my Birth Plan, by the way, but never mind – I’ve been playing catch-up. Because that’s the way it goes, isn’t it? No sooner do you figure out how to change their nappies than they start crawling. Then they’re running. Then they’re 11 and you’re sending them halfway around the world on a school trip, and thinking, Gosh, that happened fast. I wonder who’ll be giving her her 2 a.m. feed while she’s there.

Parenting, to me, is not comfortable. Challenging, yes, for sure; exhilarating, thrilling, monotonous, humbling, infuriating, confounding, magical… but not comfortable. It’s a lot less like a Louisa May Alcott novel, and more like that one by Cormac McCarthy. Not the one with the serial killer (although if he’d been firing the bolt repeatedly into his own head, I could’ve related). No, the one I mean is The Road. Where a father leads his son through a half-destroyed world, trying to teach him enough to survive, while sparing him full knowledge of its ugliness (sounds familiar, I’m sure). There is widespread devastation (uh huh), loads of crazy people (oh yes), and the father spends a lot of time just apologising for the whole situation (so many dittos). There are sadists and cannibals waiting to pounce (I’m looking at you, social media), and the father knows that he won’t be around to protect his child forever. One day he needs to trust the child, and the goodness that exists in the world, and just … you know … die (although I think that part should be taken even more metaphorically than the social media-cannibal-sadist part).

The whole thing is about as comfortable as being on a rollercoaster that runs through a haunted house: there are highs, lows, and a lot of screaming. It’s like Shrek, where you’re Shrek, your child is Princess Fiona, and the fire-breathing dragon is another child who called your child a poop-face and made her cry; although it is entirely possible your child started it, and now you don’t know what to do. It’s like Shrek, where your child is the dragon and you’re being blasted to death because you want her to sit properly at the table and not squat on her chair like a frog. It’s like The Dark Crystal, where you’re the Podling being drained of your vital essence by your Skesis-child who wakes up at 5:00 a.m. on weekends and wants to have a conversation about shoes. You’re Tenderheart the Care Bear one minute, Wonder Woman the next, and then that poor girl from The Exorcist, raging and levitating because someone put the guinea pigs in your bed.

By all accounts, being a grandparent is a breeze, though. So I’m looking forward to that.

Robyn is a part-time writer and full-time slave to her two young daughters. Originally from Johannesburg, South Africa, she now lives in a little cow-rich village in Switzerland. She spends her free time making To Do lists of things she’ll probably never get around to doing (have the car cleaned; vacuum under the bed; run a half-marathon) and putting the finishing touches to her third novel. To read more of Robyn’s writing, click here or find her on her Facebook page, Loco Parentis.

Laura has studied Journalism and Advertising, and has worked as a journalist and an illustrator. She has illustrated for magazines, websites, charities and diverse campaigns. Laura lives in Zurich with her husband and ten-year-old daughter.