They say that once you’ve learned to ride a bike, you never actually forget how to do it. Well, that may be what “they” say, but I wasn’t sure. I looked at my new bike with a mix of trepidation and awe. Because I am apparently 35 going on 5, my husband bought me a bike for my birthday. Upon seeing it, I wished that I could reliably put my money where my mouth is and just take off… But at the back of my mind, a little voice squeaked, “It has been more than 10 years.” In fact, the last time I cycled was in 2008. What if what “they say” turned out to be nothing more than an old wives’ tale? At the same time, I had visions of heading out to the shores of the Greifensee (in canton Zurich), a place which I loved and, during the lockdown, had frequently asked my husband to drive us to (even though it was cordoned off).

I got off to a wobbly start. But eventually, I had both feet off the ground, ignoring the amused stares of the neighbourhood kids – expert riders, the lot of them. The first few times, I literally just cycled around the block; over the following weeks, I began to branch out. The first time I rode a kilometre, I was ecstatic. At five km, I was ready to award myself a medal. Every single time I made a little lap of the woods behind my home, I felt that little bit closer to the person I was in 2008. At the same time, I became aware of my own limitations. Was this all I would ever do? A handful of kilometres here and there? Did I have enough faith in myself, my bicycle, and my body to do a little bit more? Surely others who looked the part were more deserving of the road than I? In my mind’s eye, the Greifensee still beckoned, albeit a little more distantly than it had before.

During the lockdown, we humans collectively fell back in love with the humble bicycle. As reported by Swissinfo, the demand for bicycles soared during the coronavirus lockdown. This was partially led by people seeking avenues for exercise, with gyms and most personal training programs taking place online. Presumably, zooming about on a bike also neatly sidestepped the issue of having to consciously social distance while out walking. However, this was also probably due to the fact that people needed to find other ways of getting to work – not just during the lockdown, but afterwards, too. Many of us seem to still be on the fence about using public transport. Nowadays, when you scroll through your social media feeds, it is very likely that you’ll come across at least one or two posts hailing the virtues of the bicycle.

My husband and his friends have gone from not cycling at all to cycling 70 km in the morning, before breakfast. All of them had run, by this point in their lives, at least a half marathon. Most had a couple of marathons under their belts. My son was cycling 25 km every morning. My students were cycling 46! For fun! We recently met an expert cyclist who informed us that in order to tackle Switzerland’s sublime scenery on a bike, one needs to practice on level ground first. Apparently at least 20 long-distance rides at speed in the valleys would build the muscle strength required to approach the more mountainous routes. Seeing that this expert had cycled, in May, in places where snow still lay on the ground, we believed him. I made a mental note. My husband has made it his mission. The Greifensee still loomed at the back of my mind, siren-like.

All the aspiring long-distance cyclists I know are kitted out:

And that’s just the beginning.

They were walking the talk. Or should that be pedalling? What’s more, I suddenly found my first post-lockdown weekends being spent in cycle shops talking about the virtues of bike trailers versus child bike seats. Some of us were moving very fast indeed, while others (a.k.a. me)…not so much. I eschewed the padded cycling shorts. No way, I thought, do I need any more padding. My humble five-to six-km laps of the local woods were beginning to look positively comical. The question remained: Would I be able to do my bicycle justice? I am not at all fit. The gym bores me, running hurts me… In fact, most conversations which include me also include my weight. It has a character of its own, to be evaluated. If no one else mentions it, I wedge it in there myself, desperate to get ahead of the curve, so to speak. If you happen to look up “mother who has let herself go” in the Urban Dictionary, you will find a picture of me. When we go out for rides together, my nine-year-old son takes it easy on me.

Cautiously, I looked up Greifensee in Google Maps for the first time, transforming a vague notion into reality. A journey there and back from our apartment was just shy of 20 kilometers. When I set out, I didn’t tell anyone. I didn’t want to return with my tail between my legs, not having made it. Whilst others – including small children! – pedalled 20 km for breakfast, that spelled “long bike ride” to me. I had visions of running out of steam.

No one was more surprised than I was to discover that I could do it. I was helped by the fact that the ride is generally flat, and most of it goes through farmland. By the time I saw the lake, shimmering white beneath a typically bright Swiss summer sun, I was euphoric. It was wonderful to feel as if, for once, my body was not a liability, and that if I could only get my mind into the game, my body might not necessarily let me down. To be honest, parts of the pier were still cordoned off and it wasn’t quite the lake experience I had envisioned, but I was too pleased with myself to really care. On the way back, I stopped off to literally smell the wildflowers and the poppies blooming by the side of the road.

As it happens, my husband headed out to Rapperswil on his bike, the following day. It’s only a mere 70 km round trip from our apartment. As I waved him off, I reminded myself that I’m not in competition with anyone other than myself.

If you hadn’t guessed by now…I’m a novice. However, these authors are not. If you are thinking about getting on your bike this summer or want to know more about Switzerland’s love affair with the bicycle, read these:

Article and photo by Nayana Chakrabarti

Nayana lives in Zurich with her husband and two children. She works as an English teacher at multiple language schools in the city. When she’s not criss-crossing the city, you can usually find her with her nose in a book. She talks about her bookish and writerly parenting journey on her microblog on Instagram, @themigratorymum. 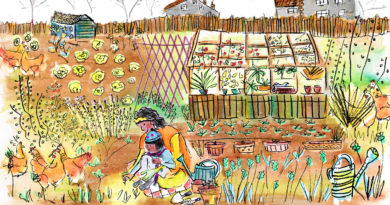